In Dec 2011, I had a really bad allergy attack. I got really bad sinus which blocked my ears and Eustachian tubes. I had bad headaches and dizziness, it felt like head and ears were going to burst. I went to the Dr's and they said to spray saline solution up my nose.

The next day I had my first vertigo attack. Derek took me to the ER and they couldn’t find anything but the blocked Eustachian tubes. For the next 4 months my health went downhill, constant dizziness, vomiting, vertigo, depression, walking into walls, eyes couldn’t focus, trips to the Dr's, another trip to the ER as the vomiting and vertigo wouldn’t stop. The Er Dr thought I had BPPV (benign paroxysmal positional vertigo) and did the Epley maneuver to move crystals in the ear and all it did was hurt my neck. A week later my Dr ordered a CT scan of head and neck, which showed the vertebrae was sitting the wrong way, he wrote a referral for ENT Ear, Nose & Throat specialist and to see a counsellor about the depression.

By the time I got into the ENT I was nearly bed bound, I was so weak from the vomiting and vertigo attacks that were lasting anything from 5 to 19hrs at a time and I was having them 3 – 4 times a week. The ENT listened to my symptoms checked my ears and did a hearing test and said to me; I'm Sorry but You Have Meniere's Disease it is Incurable. He said don’t eat anything with more than 120mg/100g of sodium in it and I will see you in 6 weeks. That was it nothing else; what to expect or anything, we had to read up about it on the internet. It is one of the most debilitating cruel incurable diseases. It robs you of your hearing (your low hearing first and then all of it) your balance as it damages your vestibule system. The damage it does is cruel as the more you rely on your eyes for balance, we forget things because our brain is constantly trying to send messages to damaged parts and the parts that are working are trying to take over, this is called brain fog and the whole thing is very draining.

Noise is another thing we have to avoid, we might not hear them but vibrations can set off a vertigo attack,( a baby crying or someone laughing, even me laughing can set me off, Harley Davidson bikes are the worse) so can certain lights, as my eyes are now my balance system. Its quiet easily to become isolated with this disease, with the whole list of things you have to avoid so you don’t trigger and attack, what is one persons trigger may not be another persons trigger same with treatment , there are not many options for us as they don’t know what causes it so they cant cure it. So far I have lost hearing completely in my left ear and the right ear keeps coming and going so we will have to wait and see.

After an Vertigo and vomiting attack it can take a couple of days of either being in bed or laying on the lounge to recover as you are very weak. If I am around people I cant hear anything at all and the audiologist said it is too much for my good ear to cope with and just goes into overload and shuts down. I need hearing aids.

I got Charlie my Cockatiel on 1st Aug 2012 to keep me company, he was 6 weeks old supposed to have been hand raised but wasn’t. He would sit on us but wouldn’t let us pet him. He would let you give him cuddles by him putting his head under your chin and you rubbing your chin over his head or giving you a kiss but wouldn’t let you touch him with your hand. But he was so adorable. He was a lovely caring thing. He picked whistles and talking up by the time he was 12 months old. He was about 3 months old when I realised, everytime the phone rang he squawked which was good because I couldn’t always hear the phone ringing unless I was sitting right next to it, even if I was in the same, room. Then he learnt to squawk when someone knocked on the door. I started to feel safe, as I was losing my hearing fairly quick. It must have been the high pitch of his squawk that allowed me to hear, and on the days that I couldn’t hear at all I felt the vibration. I also realised on my really bad dizzy off balance days he would really play up, squawking all the time and I was putting it down to his squawking but it took a bit of time to realise as soon as the vertigo and vomiting started he would shut up, he was trying to warn me of an attack. One smart bird. Most days he would just sit on my shoulder and watch what I was doing whether it was housework, or teaching myself to paint as sort of therapy for depression or sit on his cage and play on his gym. When Derek got home from work he would get cuddles and kisses off him and sit and watch tv with him. In Nov last year sadly he got sick (and being in a strange town, we moved to Melbourne Dec 2014 for better medical help for me) we didn’t know who to take him to and we lost him. It felt like a part of me died with him as he was my mate and we both still miss him dearly.

In Dec 2015 we got George from Ann and Mick (lovely people - Lifestyle Birds). He is another Cockateil and is completely different to Charlie not only in colour but in mannerism. This one lets us pet him. In fact that is all he wants to do he doesn’t want to play on the gym, he has yet to learn to let me know when the phone or intercom rings, he might when he gets older but I think it’s the environment, it is so noisy where we are living. There are always phones or people talking ( not the quiet country town where Charlie grew up and was able to hear everything) but he doesn’t like the helicopters that fly over and does Squawk to let me know when some one is at the door so it’s a start, but the main thing is he is company. I have to put him in his cage when I do my painting as he tries to help by jumping onto my hand or chewing the canvas and even eating the paint, lucky its water base but have you ever tried to wash blue paint out of birds mouth and get it off his tongue, its funny now but wasn’t at the time was so worried he would get sick from it and we would lose him too. He is very inquisitive, it doesn’t matter what we are doing he likes to “help” especially prepare meals. He loves peas but they have to be cooked not raw, and loves corn and they have to be at room temperature he is not spoilt, just a fussy eater . He also loves raw cauliflower, as well as sultanas and cranberries. Its exciting for us that he is such a diverse eater as Charlie would only eat his seed and potato he refused to eat anything else.

Hopefully as he gets older he will learn to let me know when the phone rings or when I'm about to have an attack but time will tell. He is who he is,

a gorgeous little thing that just wants to be petted and not left by himself, he hates not being in the same room as you are. Here is a photo of George. 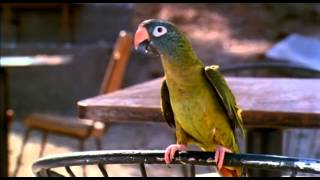 'Paulie' the Movie a Hand Raised Conure Parrot is Paulie

'I Tonya' Movie with Little Man played by a Crimson Bellied Conure. This 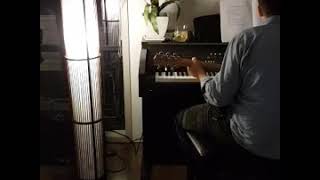